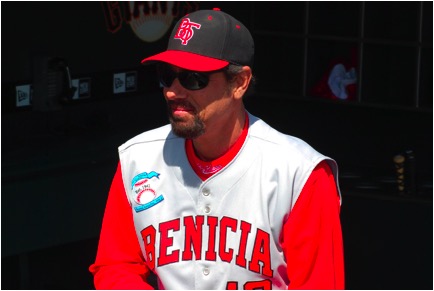 Baseball season is upon us! Time to break out the peanuts and enjoy America’s favorite pastime.

I wanted to write a quick article about something dear to my heart. While I love the game of baseball, someone who loved the game more was my late stepfather, Terry Cunningham. His family has been well known around the cities of Benicia and Vallejo, CA, and the Cunningham name holds some weight around the communities.

To honor Terry’s passing in September 2014, the Benicia Oldtimers baseball team is playing a double-header this Sunday, May 17th, 2015, on what they have deemed as Terry Cunningham Day. My stepfather had been a part of the Oldtimers baseball league for over 30 years as first baseman, and was inducted into the Nor Cal Baseball Hall of Fame in 2005.

The Oldtimers will be hosting both Vallejo and Watsonville teams this Sunday at Fitzgerald Field in Benicia, CA. The Watsonville game starts at 11:00am with the Vallejo game following after at 1:30pm. I’ll be there wearing Terry’s number 13, with my hat, glove, and some peanuts to enjoy the games!

Below is a link to the article written in the Benicia Herald newspaper:

Rents on the Rise

BottleRock Napa Valley To Include Rock Stars and Culinary Stars